Developed by Locked Door Puzzle, who seem to like putting the sound that goes with their logo really, really loud; Cosplay Maker is a time management/dating sim game.

As the rather unoriginal but quite aptly descriptive name says, the game revolves around making cosplay and all the drama and things going on around it. The game starts with you at a convention (and you can’t customize a single thing about your character), getting all ready to start on the cosplaying world. You make two friends there, a cosplayer and a photographer, who you will (if you so choose to) keep in contact with during your gameplay and meet in future conventions, and they will in turn give you ‘advice’ and introduce you to other characters as you progress through the game.

You are able to anyone of your friends provided your friendship is high enough, a stat you will have to maintain by taking some “friend time”

This is the dating aspect, which if I’m to be honest I didn’t care to try. Why? Because the characters all fell rather flat and uninteresting, and I just couldn’t muster enough interest in the storyline.

The time management aspect of the game comes in the cosplay making part. Every so many months you will have conventions to enter, and in them cosplay competitions you can enter into in turn

In order to make your costumes you need to get ideas (unlocked by buying things, relaxing with some TV, socializing, etc), and materials (which you need to buy).  In order to get money for the materials, you have to work – which causes your “energy” to go down. Energy can only be recovered by “relaxing”. So far so good: it takes typical stats to do things, so you have to manage your time carefully.

Your schedule is bunched so that Saturday and Sunday are bunched together as one big “Weekend” chunk, and your days are all bunched together in “day” and “night” of the week. You can not micro-manage day by day, which is absolute bullcrap for many reasons, the most blatantly obvious of them all being that when you get your costume to 100% completion in the middle of the week, you are still stuck “working” on it the rest of the week just because you can’t pause and modify the schedule.

Likewise, the rate at which you gain and lose stats, although manageable, is annoying and would benefit greatly from some micro-management choices

Once you’ve scheduled your day, you hit play and the week passes with a few repetitive, boring animations, but quite upbeat music. Despite the lack of interesting animations (you never actually see yourself working on the costume, you only see yourself wriggling your arms and head), the first couple of times you see this it’s alright.

After the first couple of times though, the slow speed at which the week progresses before your eyes is tedious at best, and though there are events that break up the week pop up (requiring an ‘ok’ to close, so that you can’t even go do something else meanwhile), most of the time they are a boring and inconsequential interruption. Such is the case of one in particular: “Another day of steady progress in your costume.” Geez, how… ground breaking. Can we speed this up, please?

What is more infuriating is that there is no way to skip or speed through the week. Okay, there IS a way, but you have to purchase it… can you see how ridiculous that sounds? How can something that should be in the game need to be purchased?

At this point I should mention that while there is a tutorial to the game, it’s a rather lame one, and mine got stuck for quite a bit, too.

Another annoying thing is that the cosplay costumes seem to take forever to do. I mean, seriously, I’m no seamstress and I’m pretty sure I could do something faster than this girl…

As for the rest: there is some progress and goals, the goals seem a bit far in between (from “make an outfit” straight to “win competition”) and the progress seems pretty pointless

It also seems you’re unable to sell either your old costumes nor your excess material (if you bought something by mistake, for instance). The variety style on cosplay outfits to choose from though seems okay.

That pretty much sums up all of the gameplay aspect. Moving on to the small technical bits, the game felt unnecessarily sluggish for something so 2D and plain. Sometimes switching from regular week to event seemed to take a bit too long, and the loading of my file or new costume ideas also took unnecessarily long. The loading screen also seemed to have no indication of just how long it’d take to finish loading, which was rather annoying. 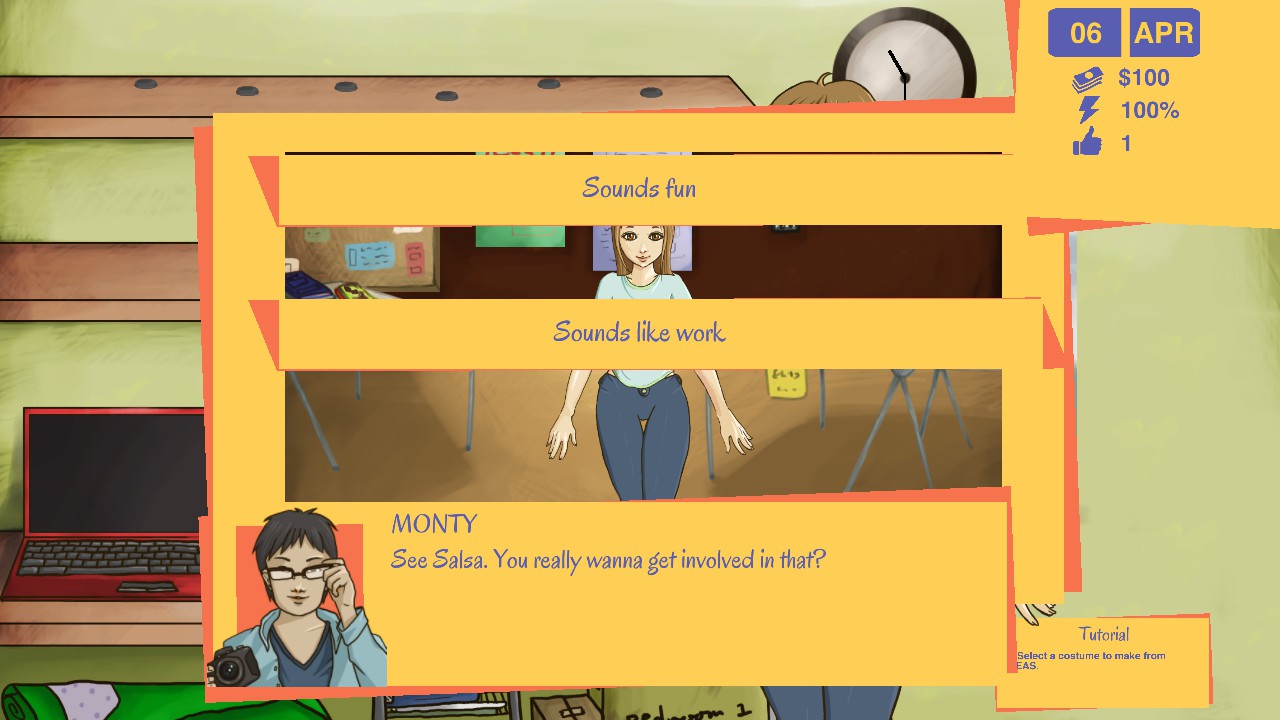 The menu is plain, the music in the menu pretty bad, but surprisingly I found myself quite liking the rest of the songs on the game – all upbeat and fun. They didn’t seem to match the game a whole lot for me, but they were nice, up to the point where the same 3-4 ones started to play over and over and over on the week play through. Good thing I liked them…

The intro video was interesting and nice, but absolutely unneeded. The whole bright color scheme of the game with the fancy old style music seemed reminiscent of Persona, only it didn’t quite make the cut. The graphics aren’t the worst I’ve seen, but they are definitely not what I’d consider “nice” or of sufficient quality to match the price tag on this game.

All in all, Cosplay Maker seems like a very good game idea executed rather poorly. You do get some fun out of playing it and it can get a bit addictive to do just one more upgrade on a cosplay or one more outfit or one more week… but it’s not really worth the price to me in its current state. Basically the only thing you’re truly paying for here is the music.

A good concept hindered by poor execution and layers of repetitive gameplay elements. Save your money and purchase The Sims Complete Pack for your simulation fix.

Karina's ReaderRank
Karina has reviewed 1053 books with an average rating of 3.007 out of 5.
101 people have found Karina's written reviews to be helpful on Goodreads.
See more...

Top 5% based on reading volume

Top 5% in books from small presses